The Hole in my Shoe - Andrew Jankunas Photography

The Hole in my Shoe 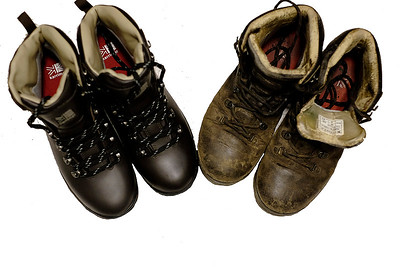 As a photographer for quite a while now - semi pro - then there is a fair bit of walking involved to carry out my pursuits. So during the course of my 'career' I've managed to wear out quite a few shoes along the way! There's no getting away from it - to get that photo, you have to travel, whether that's just locally around your home town, or going further afield, the only thing that is going to get you there are your legs! And having a good pair of shoes attached makes a mighty difference to your day too.

I managed to find my 'Holy Grail' shoes a few years back. I still have them in fact, but they are totally unusable to wear for an outing, having the sole worn away to a glass like finish now. They are used for decorating now, but quite dangerous when standing on a ladder! These shoes were so comfortable - looked good too - and just ate up the miles of trekking around cities for a few years. Of course, after a while they need replacing and, to my horror, when I went to buy another pair, I nearly died finding out that they weren't made any more. Timberlands if you're wondering. I bought something similar but they just weren't the same and didn't get the same amount of use my 'Holy Grails' did. If only I'd known when I bought the first pair, they were going to be legendary, I would have splashed the cash and purchased a second pair. I've been on the lookout ever since.

I do a fair bit of walking too with my mates in the beautiful countryside we have here in the North West of England. The same thing has happened - I bought some Karrimor boots way back in 2005 to go walking around New Zealand and until about May 2017 they were still in use for my weekend treks aroung The Lakes, The Peak District, Yorkshire Dales and North Wales. But they were getting slippy on rocks etc, so decided to try to find the same pair. I couldn't get the exact ones but found something similar made by Karrimor, but once again, poor quality lets them down and they are totally uncomfortable to wear. It's an expensive gamble on shoes when you rely on them to keep you comfortable, safe and waterproof during a hike out.